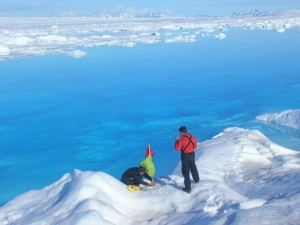 As part of the Earth Institute, the International Research Institute for Climate and Society (IRI) has created the IRI Maprooms, a collection of interactive maps and figures monitoring climate and societal conditions in the present and recent past. This year IRI began a partnership with NASA’s Goddard Space Flight Center to help solve a longstanding issue in the development of African agriculture insurance programs: generating enough quality data about the environment to enable program expansion to cover more farmers. Ultimately, this project’s findings will affect thousands of farmers participating in agriculture insurance programs across Africa.

The Earth Institute’s Center for Climate Systems Research is also working on modeling the impacts of climate change on agriculture. One of its many projects is the Agricultural Model Intercomparison and Improvement Project (AgMIP), a major international effort linking climate, crop and economic modeling to create integrated climate change assessments for the agricultural sector. The project was awarded a grant of over $10 million by the Department for International Development for project development in South Asia and Sub-Saharan Africa. Combined with the support from the Earth Institute this grant established AgMIP Regional Teams that are using integrated assessments to understand food security threats in the coming decades.

Historic sea level rise is one of the major effects of climate change. Researchers know that sea level is rising, but how fast and how high might sea levels go in the future? Columbia University Research Professor and Director of the Lamont-Doherty Earth Observatory’s Core Repository Maureen Raymo leads the Pliomax project, a team of researchers seeking to answer that question not by modeling future behavior, but by studying past Earth behavior. To do this, Pliomax examines fossil beaches around the world, beaches and reefs stranded inland when Earth cooled at the end of the Pliocene era and sea level fell. So far they’ve examined beaches in Australia, India, and South Africa, and with continued funding, will expand their exploration. This year Dr. Raymo was rewarded for her groundbreaking work with the storied Wollaston Medal; she is the first woman to win the Wollaston in the award’s 183-year history.

The Earth Institute also seeks to remedy the effects of climate change through policy and legislation, and this year, thanks to a major gift from the Andrew Sabin Family Foundation, Columbia Law School’s Center for Climate Change Law (renamed the Sabin Center for Climate Change Law) can greatly expand its initiatives and assure the center’s long-term operation. The gift also allowed the appointment of the Sabin Center’s first executive director, Michael Burger, who currently serves as an associate professor of law at Roger Williams University School of Law in Rhode Island. Burger will ensure the center continues to advance effective legal techniques and tools to fight climate change and inform governmental and nongovernmental entities alike.